BREAKING!! Sanwo-Olu Awards Scholarship For Children Of Policemen Who Died In The Lagos Violence 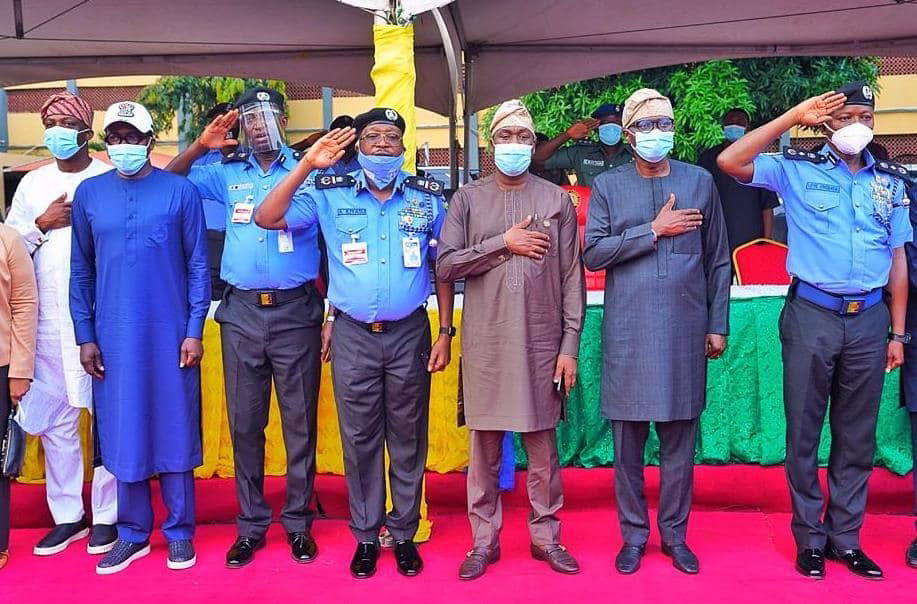 Police officers lynched in the wake of the violence that erupted last week in the State will not die in vain, Lagos State Governor, Mr. Babajide Sanwo-Olu has pledged.

The State Government, on Wednesday, directed the Lagos State Scholarship Board to award scholarship to the children of the slain officers up to the university level.

The State Police Command bore a huge loss in personnel, armoury and properties in the violence. Twenty-nine Divisional Police Stations and 17 Police Posts were razed by hoodlums disguising as protesters.

Also, six police officers were lynched, 36 critically injured, while 71 police operational vehicles were torched. In spite of the loss, the police said they remained undeterred in performing their constitutional duties. 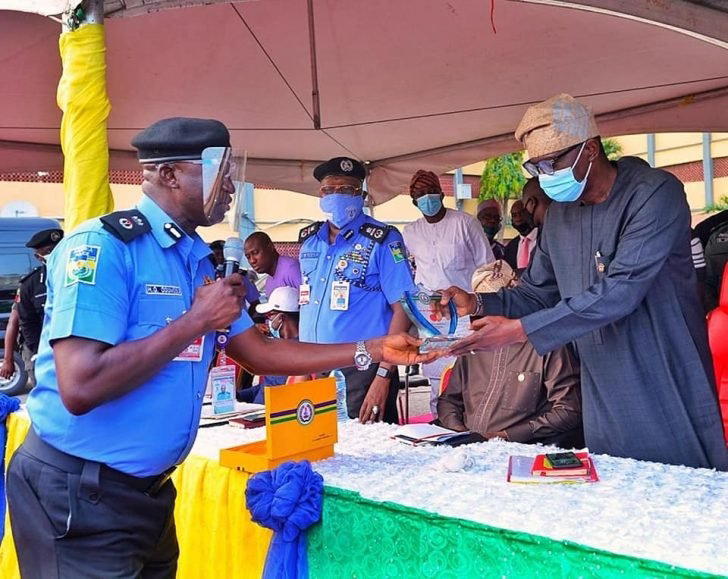 Sanwo-Olu, on Wednesday, made the offer to take the bill of replacing the logistics lost by the police when he visited the Command Headquarters in Ikeja to boost the morale of officers, following the demoralizing events of the past week in which police officers and their stations were targeted by hoodlums.

The Governor got the assurance of the police’s commitment to strengthen security across the State from the Commissioner of Police, Mr. Hakeem Odumosu.

Sanwo-Olu said the statutory duties of the Police could not be wished away because of the actions of a few bad eggs, noting that the impact of the police officers’ absence on the roads was generally felt by residents.

He said the State must put the event of the past week behind it and move on to restore peace across the communities.

To achieve this, police officers, he said, must regain their confidence. He said: “Commissioner of Police has come forward with a number of requests, which we will need to address to boost the morale of officers after the last week’s event.

As your Governor, I have come here to take full responsibility for the loss your have suffered in terms of logistics. From tomorrow (Thursday), we will start implementing these requests. “Through the Lagos State Security Trust Fund (LSSTF), we will be replacing the police operational vehicles burnt in the violence.

We have a bigger plan for all the police stations burnt down. We will look for the funds and build befitting stations that will set the standard of what police stations should be.

Sanwo-Olu said the State Government would also be compensating family members of the officers killed in the violence and take care of the burial arrangement of the slain officers, adding that the State would also be picking up the hospital bills of those injured in the mayhem.

Police officers serving in Lagos are also to get life insurance from the a State Government, Sanwo-Olu promised.

The Governor directed the Executive Secretary of LSSTF, Dr. Rasaq Balogun, to establish the modality with the police leadership in the State.

The Governor also approved the request to upgrade the Police Cottage Hospital in Ikeja, directing the Commissioner for Health to inspect the facility for the required upgrade.

In addition to donating two 150KVa generating set to the police, Sanwo-Olu said the Command Headquarters would be connected to the State’s Independent Power Project (IPP) for constant power supply.

He said: “The reform that you truly desire is starting today. The reform which the youths had clamoured for through the EndSARS protest is taking off and we will continue to engage the police on how to improve on what we have started. 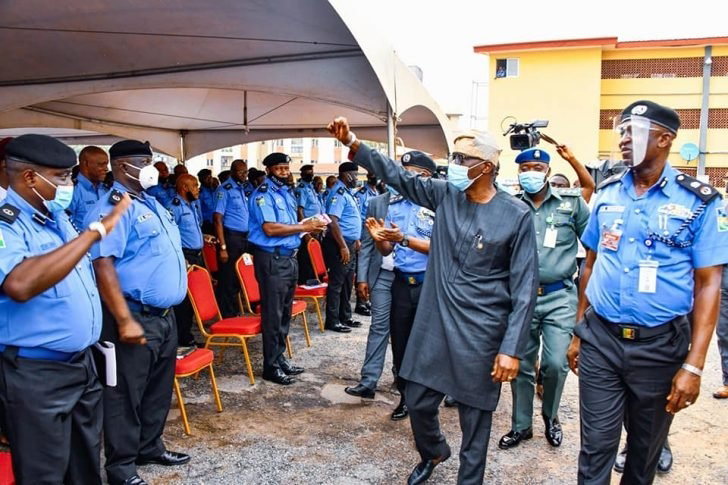 We will take up this cause with the objective to effect desired change and we will approach the high authorities for the requests that are not in our control.

“I will be leaving you with the thought that you all have the responsibility to secure lives and properties. Your uniform is not for oppression; it is a symbol of dignity and discipline. You must protect the fundamental rights of all citizens without compromising the ethics of your duty. It is only when you do this that the citizens would see that we have a Police that is truly responsible.”

Sanwo-Olu said the State would be championing the cause to improve the citizen-police relationships to prevent re-occurrence of the issues that led to the EndSARS protest.

Odumosu said the manner with which the slain officers were murdered brought down morale in the Command. He said the police officers remained committed to their statutory responsibilities, thanking the Governor for approving their requests.

The gesture, the police boss said, would restore confidence in the State’s police workforce. Deputy Inspector General (DIG) of Police in charge of Research and Planning, Leye Oyebade, said the Police took away valuable lessons from the EndSARS protest, noting that there was no better time to fully implement the community policing than now.

He said the protest had ended and it was time for the police to win back citizens’ confidence and trust.

He said: “As police officers, we must now go back to the drawing board and cultivate the goodwill of the communities in which we operate. I’m particularly charging divisional police headquarters to devise strategies tailored toward your local realities and employ digital tools.”

Top police officers, who attended the meeting with the Governor, included the Assistant Inspector General (AIG) in charge of Zone II, Ahmed Ilyasu, all Deputy Commissioners of Police and all the 14 Area Commanders across the State.

Also, all the 110 officers in charge of all Divisional Police Stations and heads of the 56 Police Departments across the State. 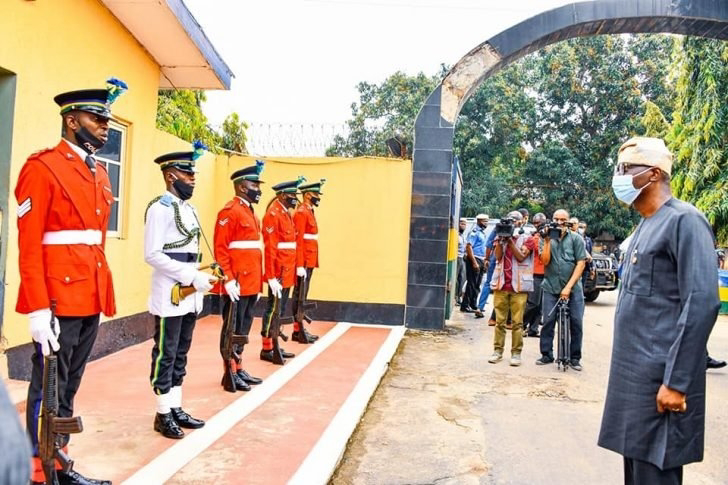 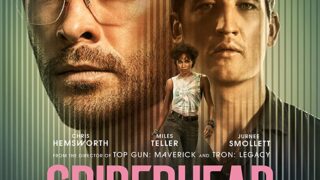 Dogs Are Being Trained To Detect Coronavirus In Humans

Bollywood Mourns Another Star As Rishi Kapoor Dies At 67