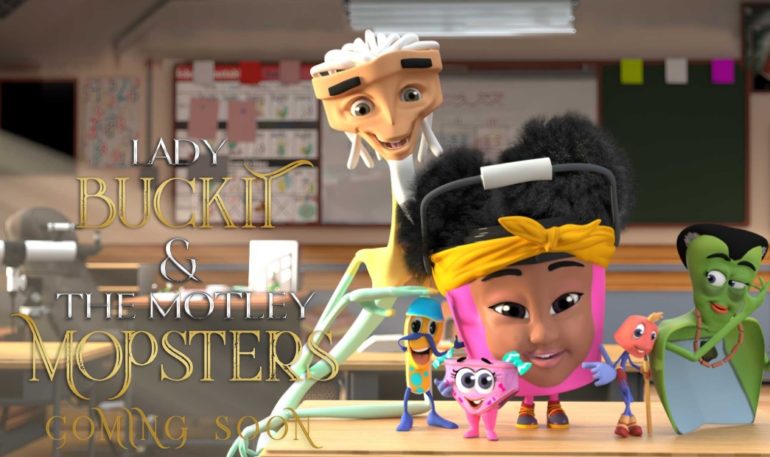 Lady Buckit and the Motley Mopsters also simply known as LBMM is a 2020 Nigerian animation family film directed by Adebisi Adetayo. The film stars Bimbo Akintola, Patrick Doyle, Bola Edwards and Kalu Ikeagwu in the lead roles. The film is also the first Nigerian first feature length animation film.[2] The film production underwent several delays since 2017. The film had its exclusive special screening at the Genesis Cinemas in Lekki, Lagos on 5 December 2020. It had its theatrical release on 11 December 2020 and opened to mixed reviews from critics.

It was revealed that the production of the movie Lady Buckit and the motley mopster  was initially supposed to begin by 2017 but had been stalled at numerous occasions due to financial issues and lack of cohesion from initial production team. Blessing Amidu attempted to find a suitable production team from Disneyland but her attempt was largely unsuccessful due to increase in budget cost. A film project titled SADE which was originally taunted to be the first Nigerian animated film was eventually shelved in 2018 due to financial tussles.
Lady Buckit and the motley mopster finally began its principal photography in November 2019 under Blessing’s own production house Hot Ticket Productions. Around 30 cast and crew members were roped in for the film shooting. year old Jessica Edwards and 13 year old David Edwards were also roped in as dubbing artists/voice actors to lend voice. The film was set in the backdrop of Oloibiri. However the film underwent further delays and derailment due to the COVID-19 pandemic in Nigeria and the resulting lockdowns in Lagos. The portions of the film were mostly shot in Lagos amid regular power cuts. The film was shot as 3D animation with 4K resolution, at 24 frames per second for each cinematic effect.
The movie’s budget was estimated around ₦400 million.
PREV